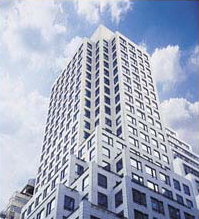 A commercial building on Madison Avenue in New York City.

Abstract The air quality in The Big Apple can result in some pretty substantial problems with rooftop cooling towers for commercial HVAC systems. Twenty years ago the owners of a large uptown commercial building on Madison Avenue, NYC decided to include an automatic self-cleaning screen filter in their new HVAC system to ward off likely problems with water quality. Today, the big roof-mounted 900 ton cooling tower continues to acts as a large community air cleaner.

Pollen, dust, insects and smoke are scrubbed from the atmosphere by the large tower. Over forty water cooled package units use the cooling tower to condition the indoor air of this commercial building. The protection provided by the filtration system is what convinced management to replace the initial installation with an improved product fifteen years later. However, the controls for the system presented a big hurdle.

The real estate portfolio of the building's owner includes over 200 retail, hotel, office and industrial properties containing over 38 million square feet under roof. This does not include over 80 undeveloped hectares (200 acres) of prime land in Northern New Jersey. Nearly all of these properties require some form of HVAC system to condition the air for occupants. One site in particular is located along Madison Avenue in Manhattan, NY (Figure 1) near Central Park.

Housing major offices and headquarters for many of America's leading corporations, the HVAC system has to work 100% of the time. The large cooling tower sits atop this 28-story building; however, this is no ordinary commercial building. Its exceptionally high ceilings put the roof as high as a typical 35-story downtown building. An automatic self-cleaning screen filter has been located on the full flow of water leaving the cooling tower since the HVAC system was installed nearly 20 years ago.

After cleaning up the HVAC system in 2002, the new filter has cleaned itself less than once per day for the last four years.

When the building was constructed, three fixed speed 270 m3/hr (1200 gpm) pumps supplied water from the 900 ton roof mounted cooling tower to 25 direct expansion water cooled package comfort units ranging in size from 14-30 tons each. In addition, nearly 20 smaller 1-5 ton similar package units were supplied water from the same tower to cool computer rooms throughout the building. Two pumps ran continuously year-round while the third was for back-up. The building's control system for HVAC was designed to maintain a fixed pressure differential (ΔP) between the supply and return water. As package units went on and off line, a by-pass valve would be controlled to maintain the preset ΔP.

Within two years of the initial HVAC system installation, problems arose on two fronts: the controls (or lack thereof) and filter mechanics. The first indications were excessive make-up water requirements and increased chemical usage in the HVAC system. This was eventually traced back to a very high frequency of filter flushing cycles. The original automatic screen filter was operated and controlled by the hydraulic pressure of the system. No PLC, microprocessor, electro-mechanical relays or electronics of any kind were associated with the filter. The filter was under the control of a hydraulic/mechanical “black box” device that sensed differential pressure across the filter body with springs, diaphragms and tubing. The ultimate movement of the diaphragm would open a passage in the “box” that allowed a hydraulic signal to be sent to a rinse valve to start the cleaning cycle. A major issue manifesting itself with the filtration system was no means of interconnecting the filter control with the building's master controls for monitoring. Problems could occur with the filter without a way of communicating with management. The operational isolation of the filter made it a potentially devastating component in the proper function of the building's comfort system.

Many automatic self-cleaning screen pressure filters use a Programmable Logic Controller (PLC) or at least a micro-processor to provide feedback to a building's master control system of the filter's physical condition before, during and after a cleaning cycle. Either a mechanical differential pressure switch (DPS) or pressure transducers are used to determine the pressure drop across the filter screen due to accumulated debris. As the openings of the screen become blocked with debris, the velocity through the remaining openings must increase to maintain a nearly constant flow rate. The pressure drop (Δp will be used for the pressure drop or differential pressure across the filter to distinguish it from ΔP across the entire HVAC system) across the screen is proportional to the square of this velocity. Therefore the Δp versus time curve is exponential as shown in Figure 2. For most of the time between cleaning cycles, the Δp is very low and increases very gradually. But just before the initiation of a cleaning cycle, Δp increases very rapidly with a very steep curve. We will see later how this is fundamental to the control of the filter.

The chief building engineer called upon a filtration specialist from another automatic screen filter company to help him troubleshoot the filtration system. Together they found two grave problems with the filter. First the “black box” controller was installed below the filter body. This control works by receiving filter inlet and outlet pressure through small diameter tubing. The physical location of this controller and its tubing led to excessive debris accumulating and eventually clogging the tubes causing control failure. This manifested itself by either not flushing the filter when it should, thus blinding the screen, or going into continuous flushes resulting in excessive make-up water for the HVAC system. Another functional issue was intermittent lack of pressure. Depending upon certain settings of the automatic by-pass valve in the HVAC system to maintain ΔP, the pressure at the filter was often insufficient to allow the filter to clean itself during a flush cycle.

The filter's “black box” was relocated to a position above the filter body to minimize debris settling in the control tubes in hopes that this would eliminate the problems. This proved futile. The filter was then stripped of its controls and a two-stage manifold and large orifice solenoid valve were provided by the helping filter manufacturer. The chief building engineer developed the control logic necessary for the filter and then acquired the services of a control design company to design the appropriate software and program it into the building's master control system. The master control would now monitor the differential pressure, Δp, across the filter itself. When this Δp reached a preset threshold the master control would close the HVAC by-pass valve, thus boosting the pressure, and send a signal to the newly installed large-orifice solenoid valve on the filter to begin the cleaning cycle. At the end of the cleaning cycle, the master control would reset the by-pass valve to its proper setting. At first all seemed well, but beware of calm seas.

Problems For Eight More Years The filter continued to clog, failing to clean itself and eventually the coating on the inside of the filter began peeling off passing debris into the HVAC system. The chief building engineer decided to replace it in 2002 to see if a different filter manufacturer could truly provide a “self-cleaning” system. The new filtera of choice was an automatic filter with 250 mm (10-inch) inlet and outlet flanges designed for 410 m3/hr (1800 gpm). The screen was of 316 stainless steel weave-wire construction with a filtration degree of 100 microns. This screen contained 9200 cm2 (1420 in2) of surface area with an open area (porosity) of 32-35%. Just prior to the time of the new filter installation, the owners replaced the existing three supply pumps with 37 KW (50 HP) VFD pumps to minimize wear and tear on the HVAC system and increase energy efficiency. At the same time, the by-pass valve for maintaining ΔP across the supply/return lines was removed and the building's master controls were reprogrammed to control the speed of the VFD pumps to maintain the proper ΔP in the system. With guidance from the filter manufacturer, the chief building engineer again called upon his control design firm to develop software that would use the building's master control center to control all functions of the new filter. The master control now was able to monitor the inlet and outlet pressure of the filter and initiate a filter cleaning cycle based on a set, but adjustable, Δp across the filter. In this application this Δp threshold was 0.5 bars (7 psig). The length of this cleaning cycle was also easily adjustable being 12 seconds for this application. The master control brings all three supply pumps to full speed when the Δp threshold is reached. It then checks to make sure the pressure at the filter is sufficient for cleaning and then initiates the cleaning cycle. After this cycle is complete, the master control checks the Δp across the filter again making sure it is low enough to deem the filter screen element “clean.” If the proper Δp (<0.15 bars or <2 psig) is sensed, the master control will reset two VFD pumps to their proper speed and shut down the third pump. If the Δp is too high, the master control will continue to repeat the cleaning cycle until the proper Δp is reached or until a preset number of cycles have occurred at which time cleaning will cease and a fault signal sent to the control command station. Under this condition the master control will speed up the supply pumps to assure proper flow to the system in spite of the accumulating resistance to flow in the clogged filter. Fortunately, this scenario has not occurred since installing the new filter.

The chief building engineer and his colleagues struggled with the old filter on the HVAC system at the uptown Manhattan high-rise for nearly 15 years. Working with filtration and control specialists, they managed to keep the old system operating marginally, by scrapping the original “black box” controller and designing a make-do system using the building's master controls. In 2002, the struggling filter was beyond salvage. A new system was installed integrating a new water filter, three large VFD water supply pumps and all the functions of a 900 ton HVAC 5 together under the control of the Building Management System. The volume of water expelled to drain with the debris from the screen is often of critical importance. This filter model uses less than 280 liters (<75 gallons) per cleaning cycle. After cleaning up the HVAC system in 2002, the new filter has cleaned itself less than once per day for the last four years. The two online VFD pumps generally discharge 225 – 275m3/hr (1000 - 1200 gpm) through the HVAC system, a little less than half their maximum capacity. Because all three pumps increase to maximum speed during the cleaning cycle, the HVAC system actually sees a slight increase in pressure during the short cleaning cycle of the filter. Four years of operation under the new system has lowered energy consumption, decreased make-up water requirements, and saved on chemical costs while improving system performance.