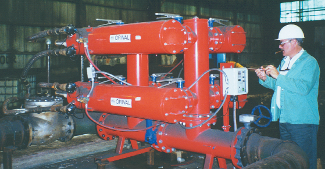 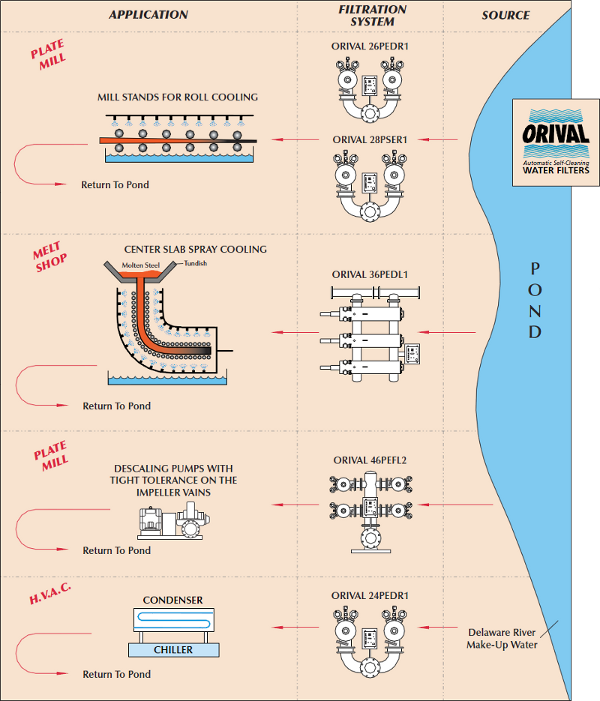 CitiSteel USA, located fifteen miles south of Philadelphia in Claymont Delaware, is a discrete producer of low alloy high strength steel plate. Citisteel is celebrating it's tenth year of operation at the facility located on the banks of the Delaware River. Makeup water from the river is utilized for the fifty million gallon closed loop process water system.

The water system contains dirt from three sources. The first source was comprised of makeup, such as sand, algae, silt, leaves and microbiological growth. Another source included process by-products, such as scale and iron oxide. The third source was airborne particles that are collected in the open surfaces. The clogging of caster nozzles in the Melt Shop and roll cooling nozzles in the Plate Mill were the most frequently encountered problems. The nozzle clogging was most prevalent in these areas due to the fine spray requirement.

Various methods of solving the contamination problems were discussed. Large system filtration packages for the main process header water feed was the initial concept. This idea of filtering all the water to micron ratings required for fine spray applications was very costly. After careful consideration and a complete system review it was decided that an alternative concept of installing filters in specific locations, designed exactly for the application requirements, was more cost effective. There was a concern, however, regarding system integration and interchangeability of parts in the various filtration locations.

With this in mind, Orival offered a complete system approach where the filters, manifolds and all necessary valves, hardware and gaskets were pre-assembled and prewired requiring only inlet, outlet, backwash and power supply connections. The manifold was prepared and coated with the same care as the Orival filters. Each system consists of Orival, 1320gpm, OR-08- PS units and Orival, 660gpm, OR-06- PE units which allows for almost a complete parts interchangeability between each system, thus reducing the level of spare parts inventory.

The problem of internal nozzles clogging was eliminated in the Plate Mill and greatly reduced in the Melt Shop with the installation of the Orival 50 micron, automatic self cleaning water filtration systems. The virtually maintenance-free filtration units were purchased as assembled units ready for flanged bolt-up connections. The only utility source, other than the water to be filtered, is a 120 VAC power source to the Omnitrol 1000 Electrical ontrol System. The control system required minor pre-startup programming that was so user friendly that a mechanical technician performed the task. Each filter can be programmed to backwash at a preset pressure differential and/or at a preset time.

The first of the units has been in operation for three years and as not required any maintenance attention other than normal daily checklist monitoring of the system's controller which displays the number of backwash cycles performed.

Orival was very supportive during the system designs and delivered each unit on or before the scheduled delivery dates. The first of the units has been in operation for three years and as not required any maintenance attention other than normal daily checklist monitoring of the system's controller which displays the number of backwash cycles performed. The other units have had similar minor maintenance requirements.

Recently, due to the 1999 northeast summer drought, the H.V.A.C. city water supply was switched to pond water. Again, Orival supplied a 25 micron pre-assembled 24PEDR1 Filtration system, allowing us to maintain the same level of cooling efficiency.